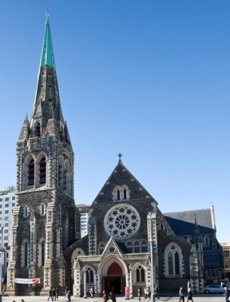 The origins of this Cathedral date back to plans of the Canterbury Association which aimed to build a city around a central cathedral and college based on the English model of Christ Church Cathedral, Oxford.

In 1858 the design was commissioned from George Gilbert Scott, a prolific British architect who was known for his Gothic Revival churches and public buildings. After financial delays NZer Benjamin Mountfort took over the project (in 1873) and adapted Scott's design. The initial plans called for wooden construction, but were changed with the discovery of a source of good quality masonry stone locally. Banks Peninsula totara and matai timber were used for the roof supports. The cathedral spire was 63 metres (207 ft) above Cathedral Square.